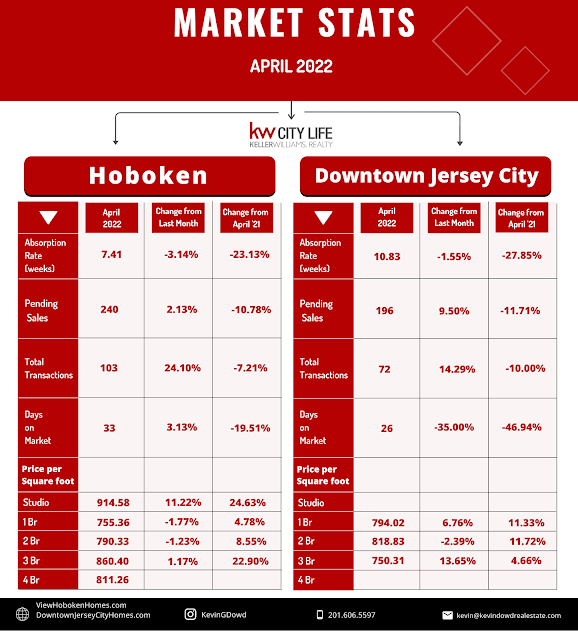 The market has continued its rapid pace despite the rapidly rising interest rates.
Hoboken
For April, properties continued to sell at a rapid pace with inventory remaining very low at 7.41 weeks, a 3.14% reduction from last month.
Total sales increased again in April by 24.10% to 103 units.  Total sales increasing against low inventory is keeping the market very active.
Studios increased 11.22% this month to $914.58/sq.ft. and 3BR condos increased by 1.17% to $860.40/sq.ft.
1BR and 2BR units saw modest decreases of 1.77% and 1.23%, respectively.
Downtown Jersey City
Downtown Jersey City performed very well again in April with inventory shrinking another 1.55% to 10.83 weeks.
Low inventory coupled with increasing demand pushed total sales up 14.29% to 72 units.
Again, the low inventory and high demand is causing properties in downtown Jersey City to sell for over asking and in several cases for significantly over asking price.
It does seem at the moment that every good listing is involved in a multi-bid situation.
Further indication of an active market is the fact that the days on the market (DOM) decreased 35% to just 26 days.  Impressive.
1BR units saw a 6.76% increase to $794.02/sq.ft. while 3BR units saw an increase of 13.65% to $750.31/sq.ft.
Happy Hunting!