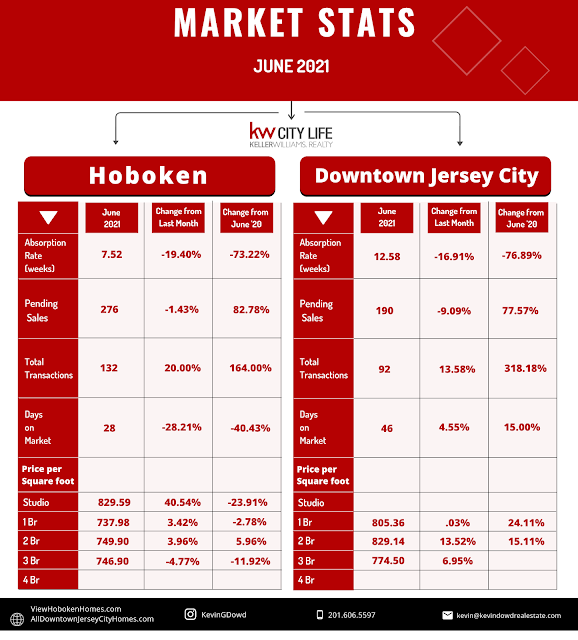 We saw an even stronger market for June as buyers continue to enter back into the market.
Hoboken
The pace of sales continued again in June with the absorption rate dropping to 7.52 weeks. We haven't seen the market move this fast since August 2017.  March 2020 was a fast month as well, but that was because inventory stopped entering the market, so it was an anomaly.
Days are on the market are the lowest they've been since November 2017.
Prices are also bouncing up against record levels as well.
Downtown Jersey City
The market strengthened for downtown Jersey City as well with the absorption rate dropping to 12.58 weeks which is a level we haven't seen since December 2017.
Pending sales dropped this month by 9.09% to 190 units, but still strong numbers.
Total sales increased 1.25% to 92 units, up 13.58% and at levels we haven't seen since August 2016.
Days on the market bumped up 4.55% to 46 days, but still trending down overall.
2BR units hit $829.14/sq.ft. which are prices we haven't seen since December 2019.
1BR and 3BR performed as well, but not as well at 2BR units.
Overall the market is performing very strongly in Hoboken and downtown Jersey City.
Low inventory coupled with surging demand is creating a very favorable seller's market.

Glad to chat your blog, I seem to be forward to more reliable articles and I think we all wish to thank so many good articles, blog to share with us. marble falls homes for sale

This is an excellent post I seen thanks to share it. It is really what I wanted to see hope in future you will continue for sharing such a excellent post. real estate in horseshoe bay