For June we saw a bit of a shift in the market.  There was a large increase in inventory which which wasn't met with increased demand.  As a result properties lingered a bit longer on the market which is shown by the increase in the absorption rate and days on the market.

Days on the market also increased 56.67% which also supports the market slowing down a bit.

The market slowing down doesn't automatically mean that prices are going to drop.

Things slowed down a bit more in downtown Jersey City with the absorption rate increasing to 54.43 weeks which is an increase of 53.86%.  Total sales dropped to 22 units, which is the lowest it's been since January 2012.

With so few sales it's a bit difficult to get the true read on pricing.

Let's see how the pending sales convert in the next 1-2 months. 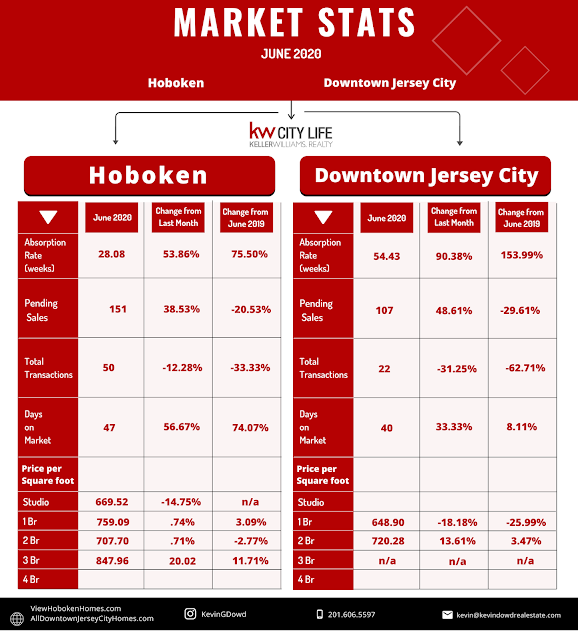 I always was concerned in this subject and stock still am, appreciate it for putting up. One North Eden

Thanks for taking the time to talk about this, I feel fervently about this and I take pleasure in learning about this topic. Please, as you gain information, please update this blog with more information. I have found it very useful. Ryse Residences

So funcy to see the article within this blog. Thank you for posting it Shalom Lamm

Can I say what relief to find someone who really knows what theyre discussing on the net. You definitely have learned to bring a difficulty to light making it important. The diet should look at this and understand why side on the story. I cant believe youre less common simply because you definitely possess the gift. Yonkers Real Estate Attorney

When selling a property, hiring an experienced real estate agent is critical. It is particularly important for first time sellers. Many agents hold open houses to generate additional interest in a property and make it easy for prospective buyers to stop by. New lenox Realtors

you should always be careful with recruitment agencies because some of them are just scammers., Cbd

This is the correct weblog for everyone who is would like to learn about this topic. You are aware of much its almost challenging to argue along with you (not that I personally would want…HaHa). You certainly put a different spin on a topic thats been revealed for several years. Fantastic stuff, just great! Expert Property Management Company Near Me

Buy a luxury property and an elegant villa in Mykonos island Greece said...

A slow economy is a big challenge for any homeowner needing to sell their home. Many homes for sale are remaining on the market for much longer than expected.

We buy houses in ANY CONDITION in Georgia. There are no commissions or fees and no obligation whatsoever. Sell My House Fast