Downtown Jersey City - The History Behind The Sugar House 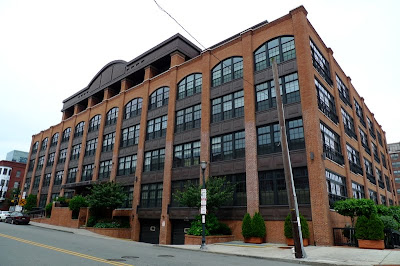 As many of you know, Hoboken and downtown Jersey City utilize a lot of "repurposed buildings" - schools and factories and other buildings converted into condominium residences.

The Sugar House in downtown Jersey City has an interesting history that I wanted to share with you.


The Sugar House, a Jersey City waterfront warehouse, was designed by architect Detlef Leinau in 1863. It eventually became part of the American Sugar Refining Company and stood on the corner of Essex and Washington Streets on the south side of the Morris Canal.

The local architect Detlef Lienau (1818-1887), born in Denmark, was a founder of the American Institute of Architects and had an office at 111 Broadway in New York City. He was known for the building of homes on Fifth Avenue and for his wealthy clients like August Belmont and the Astors. Lienau built his first house in Jersey City for his brother Michael in 1849. He also built the Grace Church Van Vorst in 1850-53, the Mechanics and Traders Bank building in 1859, and the original First National Bank building at One Exchange Place in 1864.

F.O. Matthiessen & Wiechers, a stock investment company began the sugar refining business in Jersey. Another refinery plant on the north side of the Morris Canal was built in 1868 to refine Cuban molasses. That operation was discontinued with the introduction of centrifugal machines for the efficient refining of sugar. By 1890 the American Sugar Refining Company took over the refinery plants and was producing a variety of over 5,000 barrels of 360 pounds each of refined sugar a day from raw sugar imported worldwide.

By 1907, the Refining Company employed over fifteen hundred workers and occupied four city blocks with an expanse of over nine hundred feet of waterfront to receive transport ships. During this time of industrial expansion, the company was noted both for the quality of its product and for its progressive views on the redesign of production equipment in its own machine shops to remain a leader in its industry.

On November 14, 1924, a four-alarm fire originating at the Battielle and Renwick Saltpeter Co. on Morris and Warren streets spread across the street to the Sugar House. Saltpeter or sodium nitrate is used in the making of explosives and is highly inflammable. The fire caused the evacuation of nine hundred residents in nearby wooden tenements in the immigrant neighborhood known as "Gammontown." No one was killed during the fire. News reports claim that the daytime conflagration, starting at nine a.m., enabled firefighters to bring the injured to safety. The fire gutted the Sugar House and consumed the Heppe Paper Box Co., next to the saltpeter facility. Part of the Sugar House complex and the Colgate Company storage plant, on the east side of Essex Street, were saved by the dynamiting of "an overhead passageway connecting the soap plant and the sugar house to halt the flames" (Jersey Journal, 18 December 1964).

The rapid spreading of the fire, explosive noises and shattering of windowpanes reminded some Jersey City residents of the Black Tom explosion, only eight years earlier. Thickening smoke and sparks carried by heavy winds affected homes surrounding Morris, Essex, Washington, and Warren streets. Firemen, incapable of reaching the fire, could only water adjacent properties as a preventative measure. Fireboats used the access of the Morris Canal Basin at the foot of Washington Street to protect the piers and properties south of the fire.

Fire officials claim the overheating of the machinery in the manufacture of the saltpeter to be the cause of the fire; however, company officials held that a bonfire set next to the building caused the sparks to ignite a fire in the basement. The fire that raged for four hours destroyed thirty-seven tenement houses and several large factories with total property damage amounting to approximately one million dollars. The only building on the block of the fire to remain in tact was the Onyx Chemical Co., next to the saltpeter plant. This "fireproof" building was constructed in 1923.

The Sugar House survived another fire in 1955. It was renovated by Diversified Management Systems and today is a sixty-four unit condominium and opened for occupancy in June 2001.

Very thoughtful words, thank you and hope that you will give us more information soon. It is a pleasure to have this type of important information. Keep it up please.